For the future of our state

Join the fight for progress

GRAPHIC: More than 1.5 Million People in Connecticut with Pre-Existing Conditions Protected by the ACA 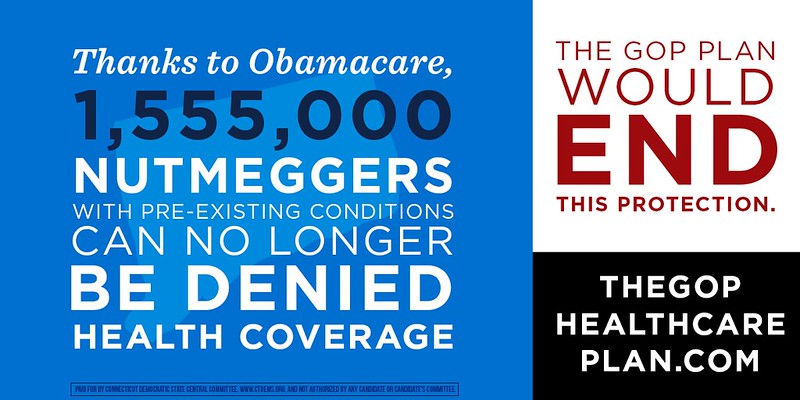 For the first time, because of the health care law, insurance companies will be prohibited from denying health coverage for the up to 129 million Americans with pre-existing conditions such as cancer, asthma, or diabetes. Insurance companies will also no longer be able to charge higher premiums based on health status or history. Since 2010, the Affordable Care Act has prohibited insurance companies from denying coverage to the up to 17 million children with pre-existing conditions. This protection is extended to adults beginning in January 2014.

“The contrast on health care is clear: Democrats continue to fight to expand benefits and protections for people in Connecticut, while Tea Party Republicans shut down the government in a reckless and irresponsible attempt to take them away,” said Connecticut Democratic Party Chair Nancy DiNardo. “Thanks to the Affordable Care Act, more than a million people in Connecticut with pre-existing conditions, have protections that keep them from being denied coverage or charged higher premiums. Yet if Republicans had their way, protections like these would be taken away from people in Connecticut, and we would return to a health care system where insurers routinely denied people coverage because of a past illness. Democrats will continue to fight to ensure we expand and improve these benefits.”

Helping middle class families and American small businesses take advantage of the benefits of the health care law– like the security of affordable health care coverage and protection from discrimination based on pre-existing conditions– should be a top priority for lawmakers in Washington. Yet instead of working to fix the law, a minority in Congress has voted to repeal the health care law more than 40 times, even shutting down the government to prevent new benefits like ending discrimination based on pre-existing conditions, taking away peace of mind and threatening critical health care protections for more than a million people in Connecticut.